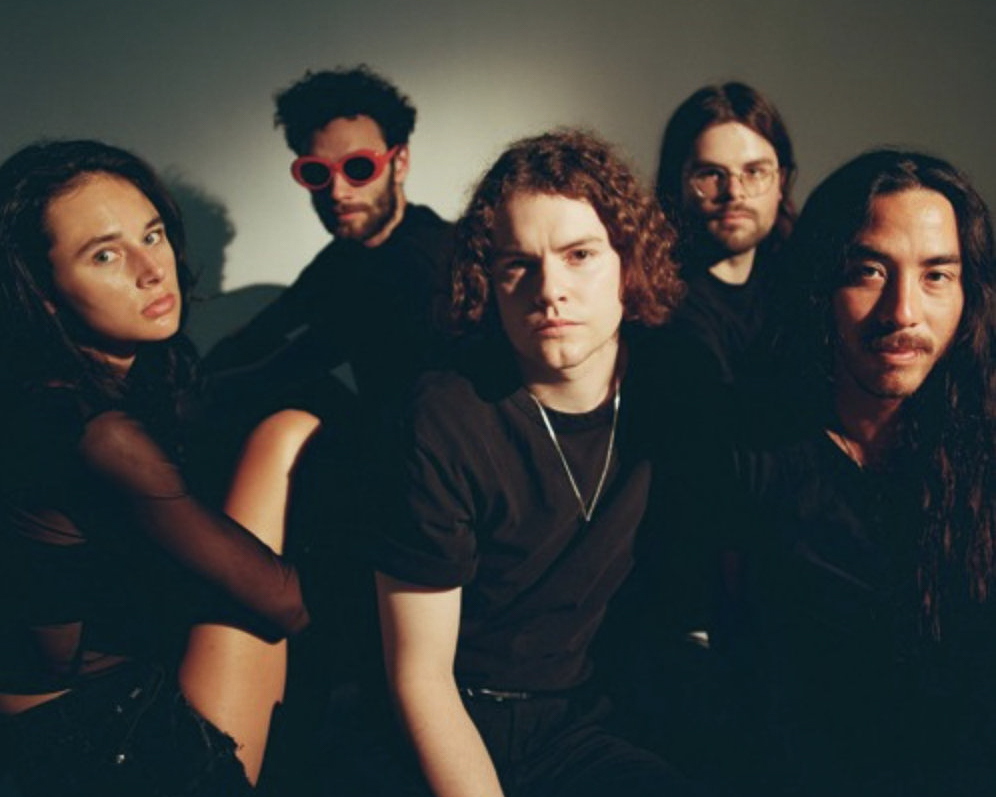 Surprise—psychedelic Brooklyn, NY quintet GIFT unwrap what Rolling Stone calls “a portal to another dimension” on their debut album, Momentary Presence, out October 14, 2022.

On GIFT’S kaleidoscopic debut, bandleader TJ Freda & co. uncap the lens to project their vibrant spectrum of psych, krautrock, dreampop, post-punk, noise rock and electronica upon the vacant surfaces of the mind—inviting listeners to, in the words of countercultural guru Ram Dass, “be here now.”

Momentary Presence exists, and that’s enough.There is no beginning and no end. From the percolating, in medias res intro of album opener “When You Feel It Come Around” through the swirling, gliding and expansive conclusion of “Here And Now (Time Floats By),” GIFT retains the element of cosmic surprise.

Treat yourself to Momentary Presence at finer record stores and streaming apps on October 14, 2022—only on Dedstrange.

Prior to delving into A Round of Applause — Hoveriii’s second album through The Reverberation Appreciation Society —the band had stuck to a routine of issuing about two releases a year (including singles, live albums, etc.). After the rise of a certain five-letter word that starts with a C, they realized that time really shouldn’t be taken for granted. Finding additional inspiration via Nick Cave, who once said that dabbling with new ideas continues to fuel his near-50-year career, the band decidedly took a different approach with their new album and gave themselves the freedom to explore in the studio.

The end result is A Round of Applause, an expansive and even, at times, experimental record. Whereas 2021’s Water for the Frogs was akin to a jam-band record — most of its seven songs are about five minutes long (including a closing track that lasts nearly 10) — A Round of Applause could be considered their “pop” album. Occasionally paying homage to the Canterbury scene, the band consider it to be a palette cleanser of sorts. “I am not really a playlist guy or a singles guy,” Hoover admits. “I’m really into the album experience. … So yeah, we made a pop record. But also, to me, this record is very progressive as well, and I think that that provides a nice balance.” He previously referred to Water for the Frogs as the band’s equivalent of Iggy Pop’s The Idiot. Playing with that idea he says A Round of Applause is the kindred spirit of Lust For Life.

Hooveriii derived the album title from the late-‘80s Roky Erickson song “Click Your Fingers Applauding the Play.” “That’s too much of a mouthful,” Hoover qualified. “My title, A Round of Applause, just came one day, and we were like, ‘Yo, that sounds like a Gentle Giant record.’"

Reflecting the mostly lighthearted and uplifting record, A Round of Applause closes cheekily — but not sarcastically — with the sound of people clapping. Hoover adds graciously: “We've been lucky so far. I don't think we really have a, you know, ‘bad song.’ ” Maybe one will, someday. But Hoover doesn’t dwell on that; after all, his band has more records to make — and time is of the essence.

James began writing highly conceptual songs about nature, magic, the supernatural, and other ephemeral weirdness that whirred by in the form of minute-long blasts of futuristic lo-fi psych-pop. Longest Day of the Year isn’t so much a departure from the surreality of earlier material as an evolution. The lyrics here start to reflect more of James’ lived experiences than obtuse concepts, and while the arrangements can seem more streamlined at first blush, these ten songs use straightforward guitar rock adornment as a means to dress up an inherent strangeness that’s at the core of the project.

This manifests as sunset-colored melancholy and mellow overdriven guitar tones on album opener “Wait For You,” or in the unfussy amble of “Same Old Bumpy Road.” Hints of recognizable ‘90s alt rock or twangy slowcore show up here and there, but closer listening reveals how winding and non-linear these seemingly stripped-down songs actually are. “Shy of a Nurse” wraps its heart-rending hooks in a tangle of feedback, and “Walk On Down” wanders through a lonely dust storm of jangling acoustic guitars and graceful vocal harmonies before opening up into an unexpected clearing of bells and key-changing countermelodies. This unpredictable twisting puts Dari Bay in a lineage of idiosyncratic songwriters that reaches from Judee Sill and Alex Chilton through to Elliott Smith and Liz Phair, right up to present day boundary-bending contemporaries like Hovvdy, Ovlov, or Helvetia. The songs invite everyone in with a friendly smile, but make no promises as to where they’ll take us after that. Throughout Longest Day of the Year, James leans into listener expectations as often as he completely disregards them, ultimately finding a captivating equilibrium between the alien and the familiar.