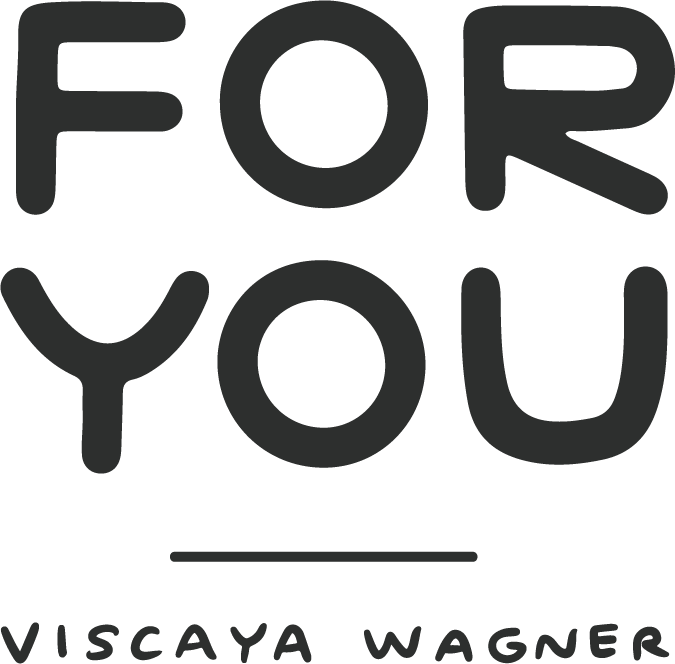 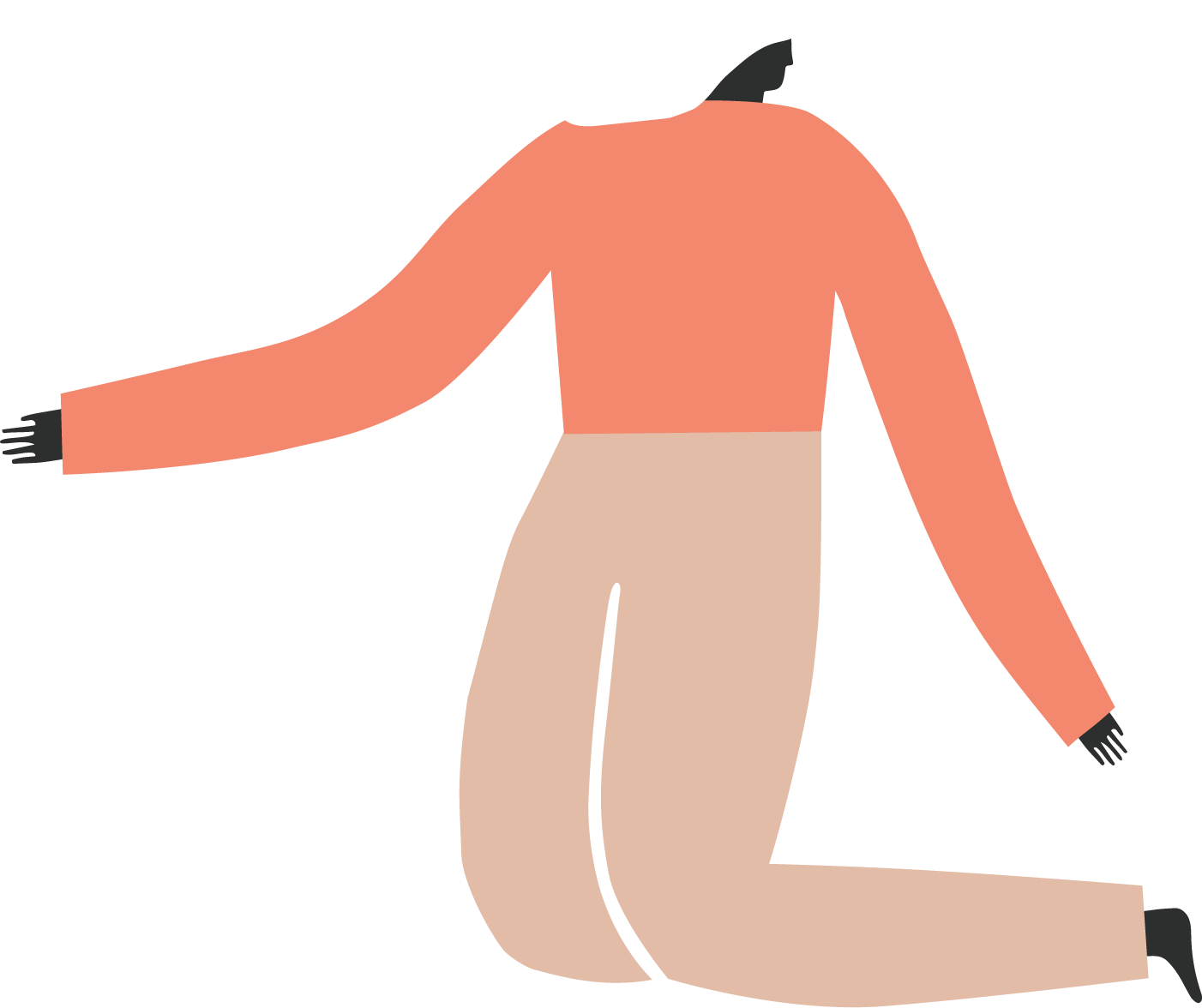 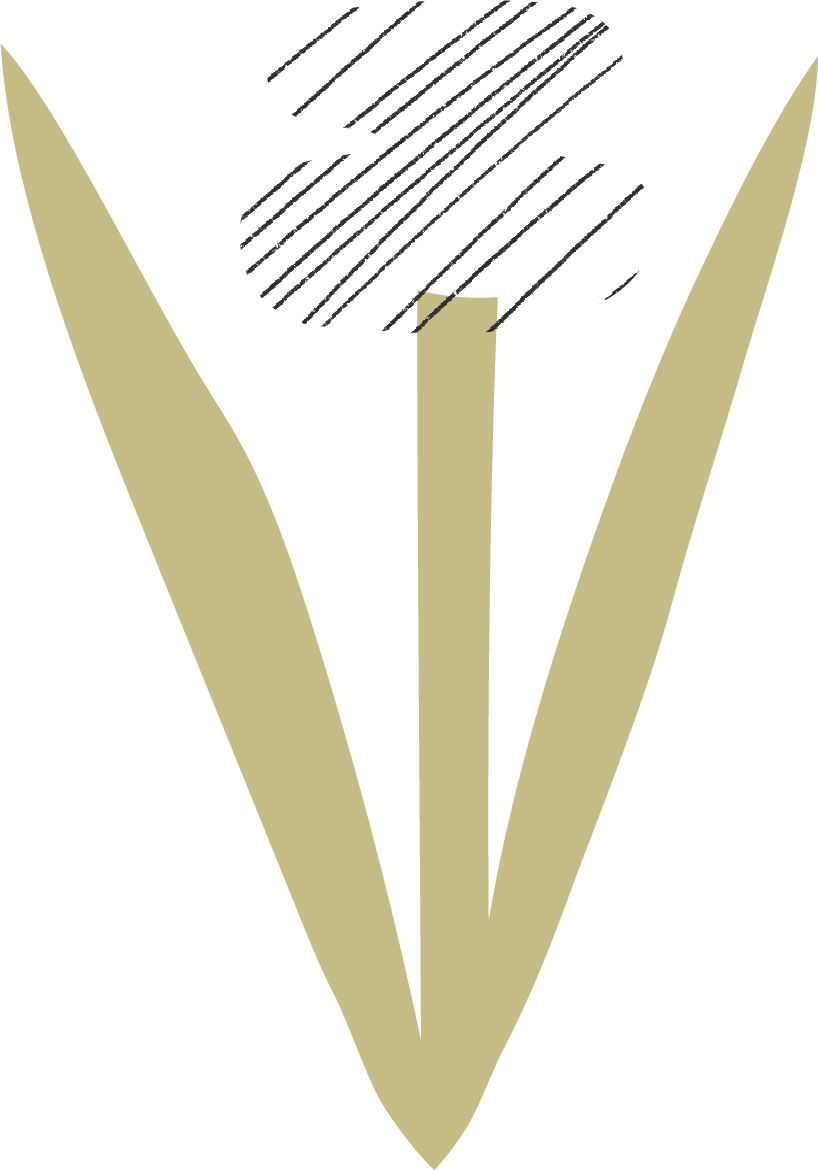 Introducing “For You,” a new Pale Ale from Foam Brewers that utilizes 100% local ingredients. 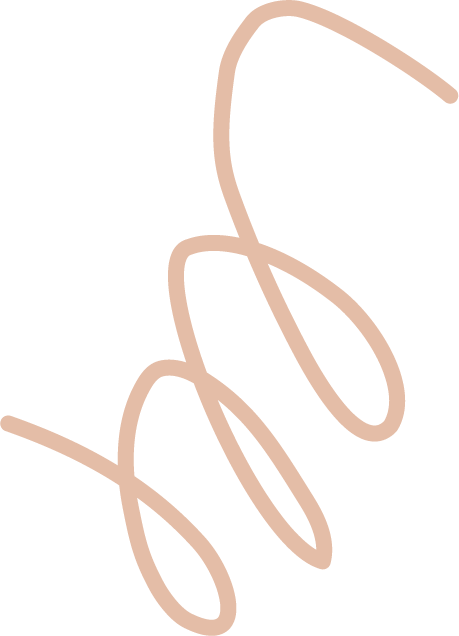 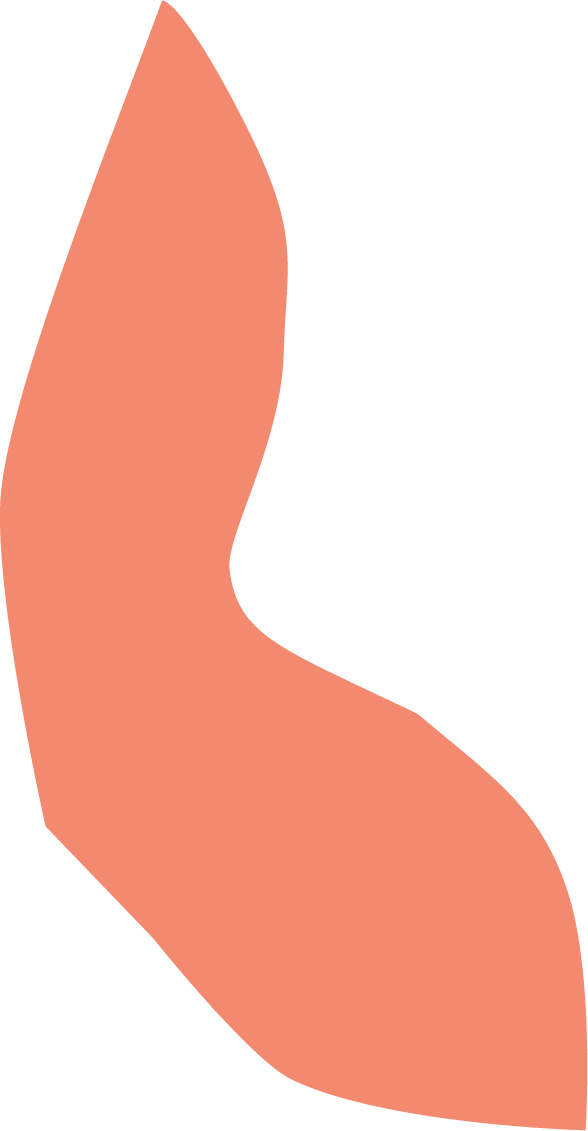 Honoring Our Community by Brewing For You:

Here in Vermont, there isn’t just one thing that makes our community special. It’s the unique combination of passion, vision, collaboration, and opportunity that result in an amazing culture centered around our shared values. Our local community is a camradery, consisting of individuals coming together and working towards common objectives. Eager to be stewards of our community, Foam Brewers has long supported our local farms, consciously and intentionally sourcing locally grown and processed ingredients for use in our brewing process.

It’s something we’ve always done here at Foam, not as a marketing effort, but simply because it’s in our nature. Since the establishment of our Vermont Brewery, each of our uniquely crafted beers have been mindfully brewed using local ingredients derived from our neighboring farms whenever possible. Through this symbiotic relationship, our connection to local agriculture has grown beyond simple monetary support and into supporting a movement focused on developing long term goals and systems around consistently sourcing high quality grain and hops, grown right here.

With that said, we’re excited to announce the launch of For You, a Pale Ale showcasing 100% locally sourced grains and hops. Every ingredient in this beer has been sourced within a 100-mile radius from where we brew and serve it, making For You a particularly exciting reflection of the collaborative efforts amongst the individuals and organizations within our region. We consider the suppliers of ingredients within this release some of our closest partners with whom we take great pride in working with. 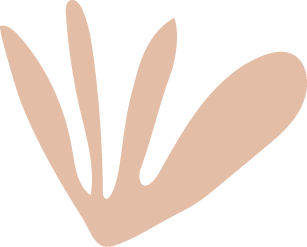 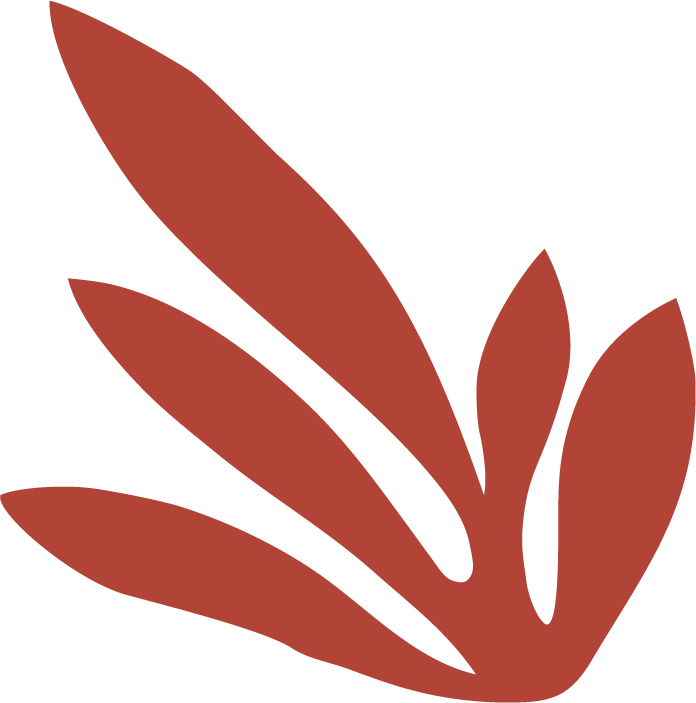 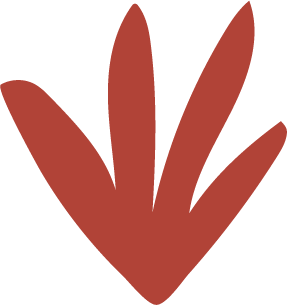 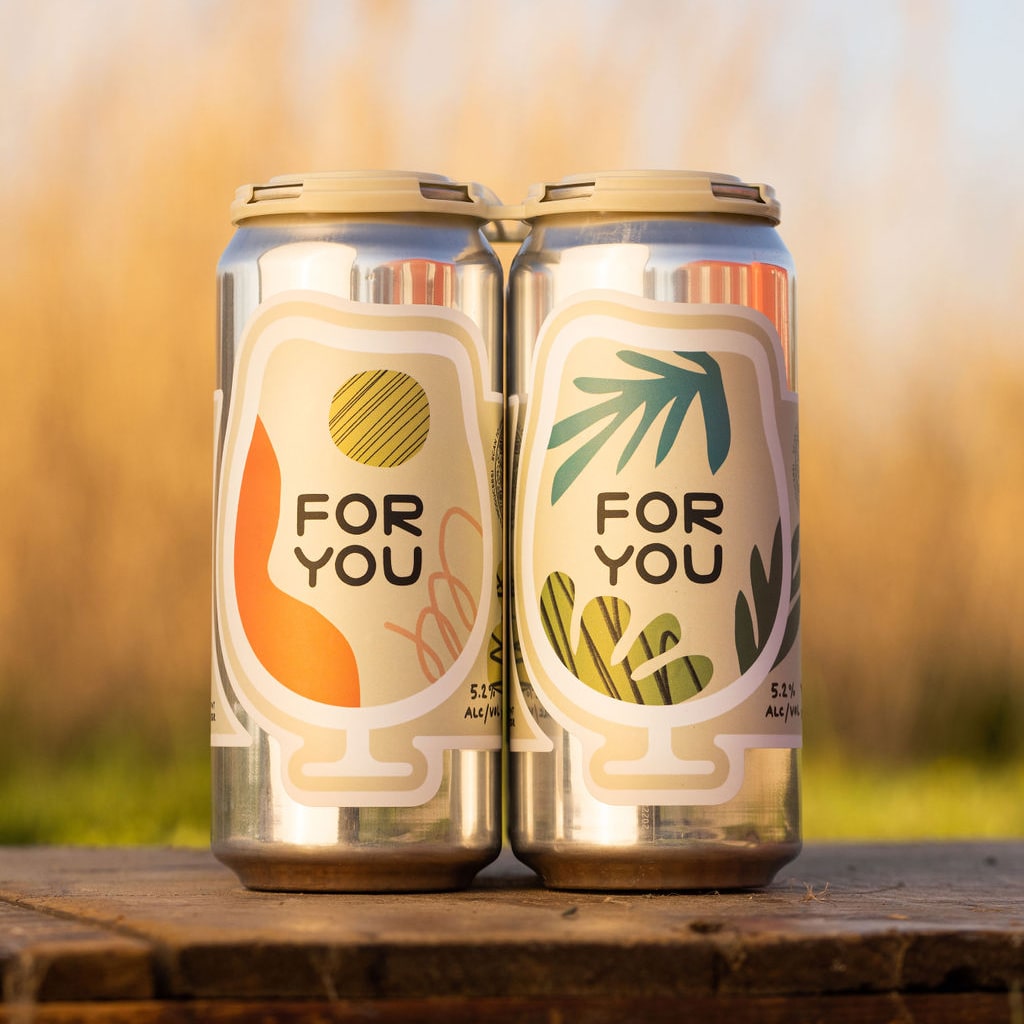 For You cans at VT Malthouse - Photographer: Montgomery Sheridan

For You - A Juicy, Truly Vermont, Pale Ale:

When it comes to beer, it’s never about just one ingredient, but rather a complex blend of water, hops, grains and yeast, interwoven to bring to you a finished product that speaks for itself. We are lucky to have some incredible suppliers here in Vermont, allowing us to produce world class beer from a small footprint. With For You, we’ve curated a blend of ingredients from some of the farms and suppliers that we’ve worked with most consistently over the years to create an approachable, 5.2% pale ale. On the nose, you will find notes of fresh hop oil and citrus forward flavors of Orangina and pomelo on the palate. On the finish, we perceive a variety of stone fruit and a slight dankness. Subtle honeydew melon persist throughout the entire drinking experience, a characteristic we find specific to locally grown hops, our Vermont terroir. 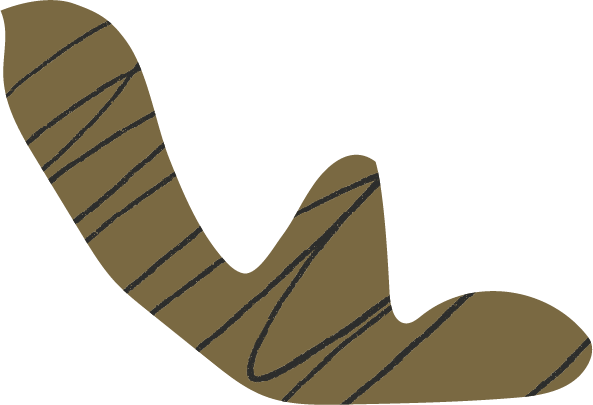 For You is brewed with a fusion of Pilsen malt, flaked wheat, flaked maize, a favorite classic “C” hop from Whitefield Hop Yard, and a proprietary hop blend designed specifically for Foam with Champlain Valley Hops. 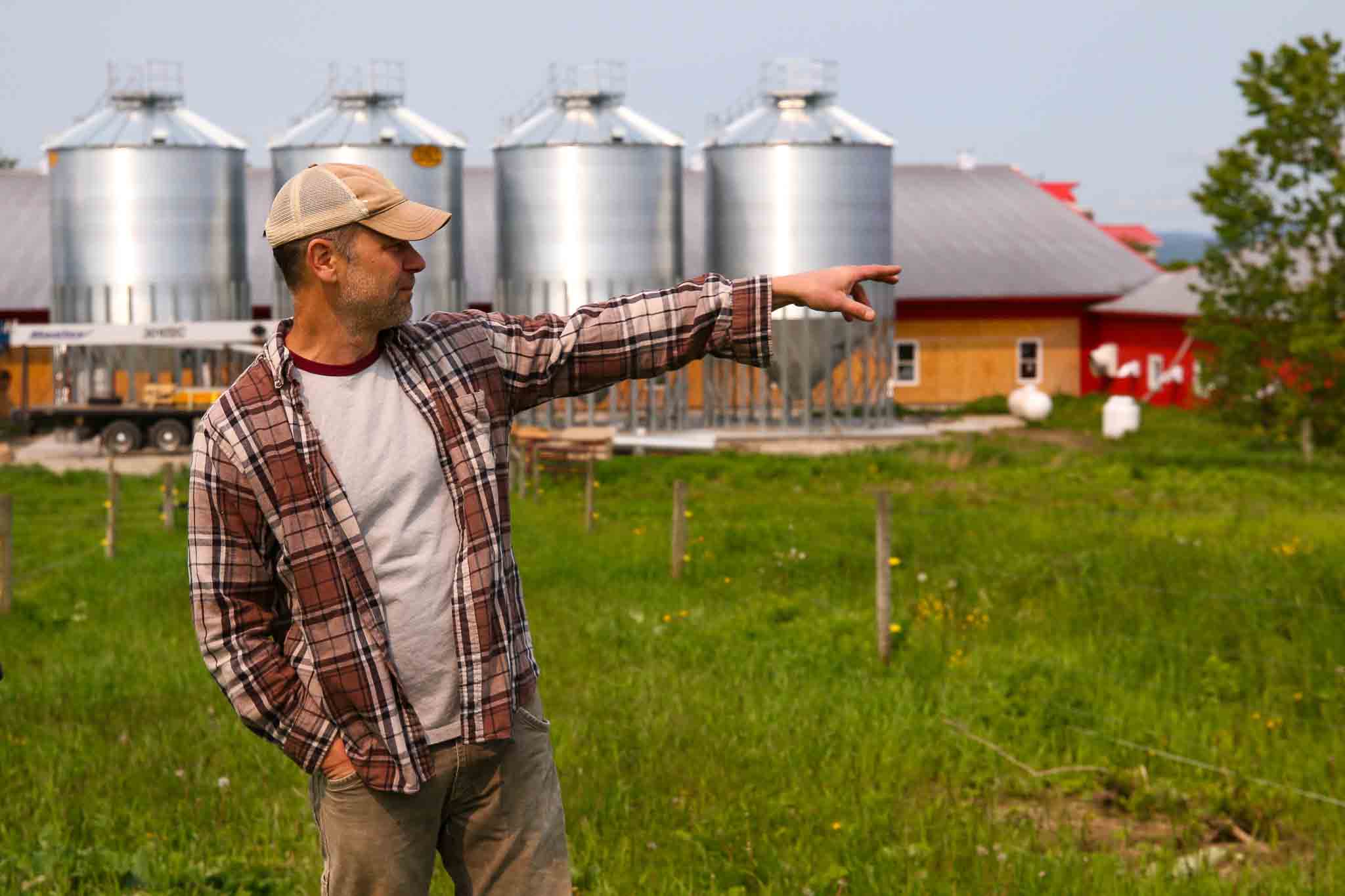 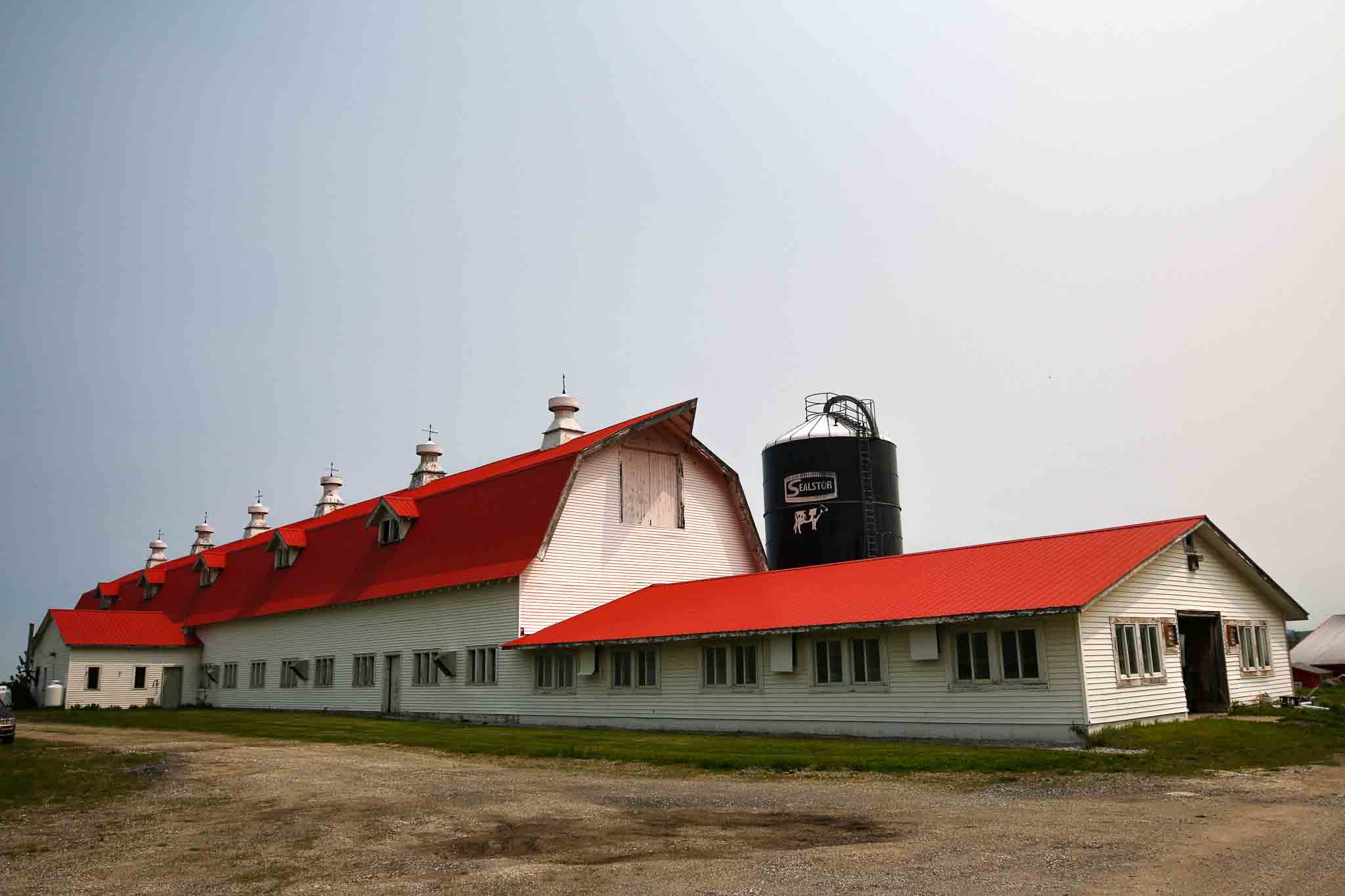 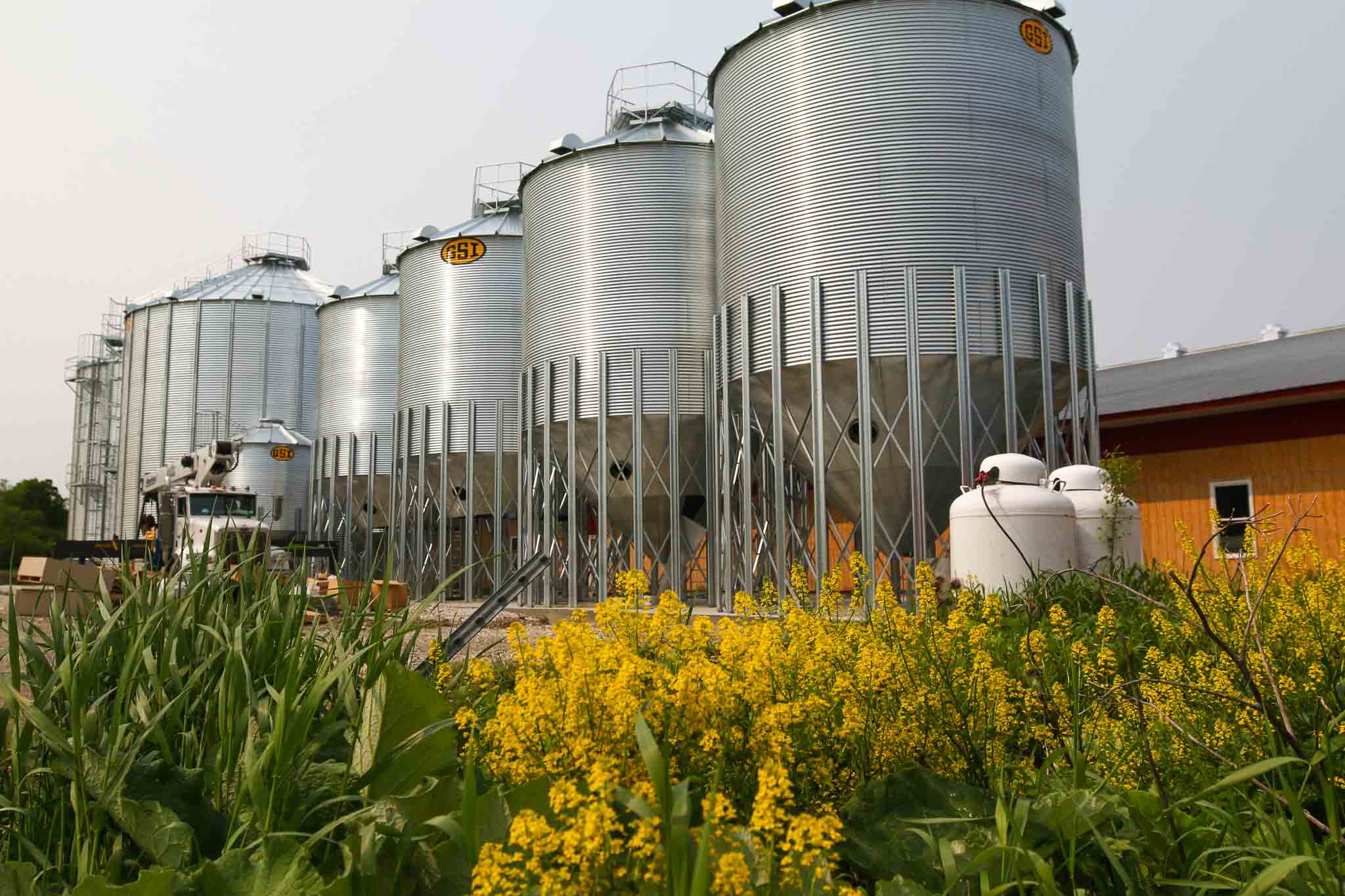 Starting with the base Pilsner malt, this crucial ingredient is procured from our partners at VT Malthouse, at Earthkeep Farmcommon, formerly known as Peterson Quality malt and Nordic Farm. Operating as maltsters of regionally sourced grains, VT Malthouse is a key part of the master plan for Earthkeep Farmcommon, a new endeavor operating on 583 acres of quintessential Vermont farmland that the team behind VT Malthouse and investor Will Raap hope to turn into a regional grain hub, supplying a number of brewers, distillers, and bakers. Boasting the unique characteristics of VT Malthouse’s sustainably grown grains, the palatable taste in each of our beers that use their malted grains speaks to the terroir to which they were procured.

Fun Fact: House of Fermentology, our sister blendery, has resided in the farm that is now Earthkeep Farmcommon since 2019. Since then, it has also become home to the winery we started in the summer of 2020 called Natural Hack.

NEK Grains, based in Waterford, Vermont, is a family owned and operated farm business proudly producing high quality grains. Foam has been lucky enough to have worked alongside and partnered with NEK Grains since 2019, aiding to the success of our beers through the use of their flaked wheat which produces a soft yet crisp mouthfeel.

Fun Fact: At this point all the wheat we source, no matter the beer, comes from NEK Grains and/or Nitty Gritty Grain. We use, on average, 30% wheat in all our hoppy beers you can be confident that drinking any Foam pale ale to triple IPA means you are supporting local farms. 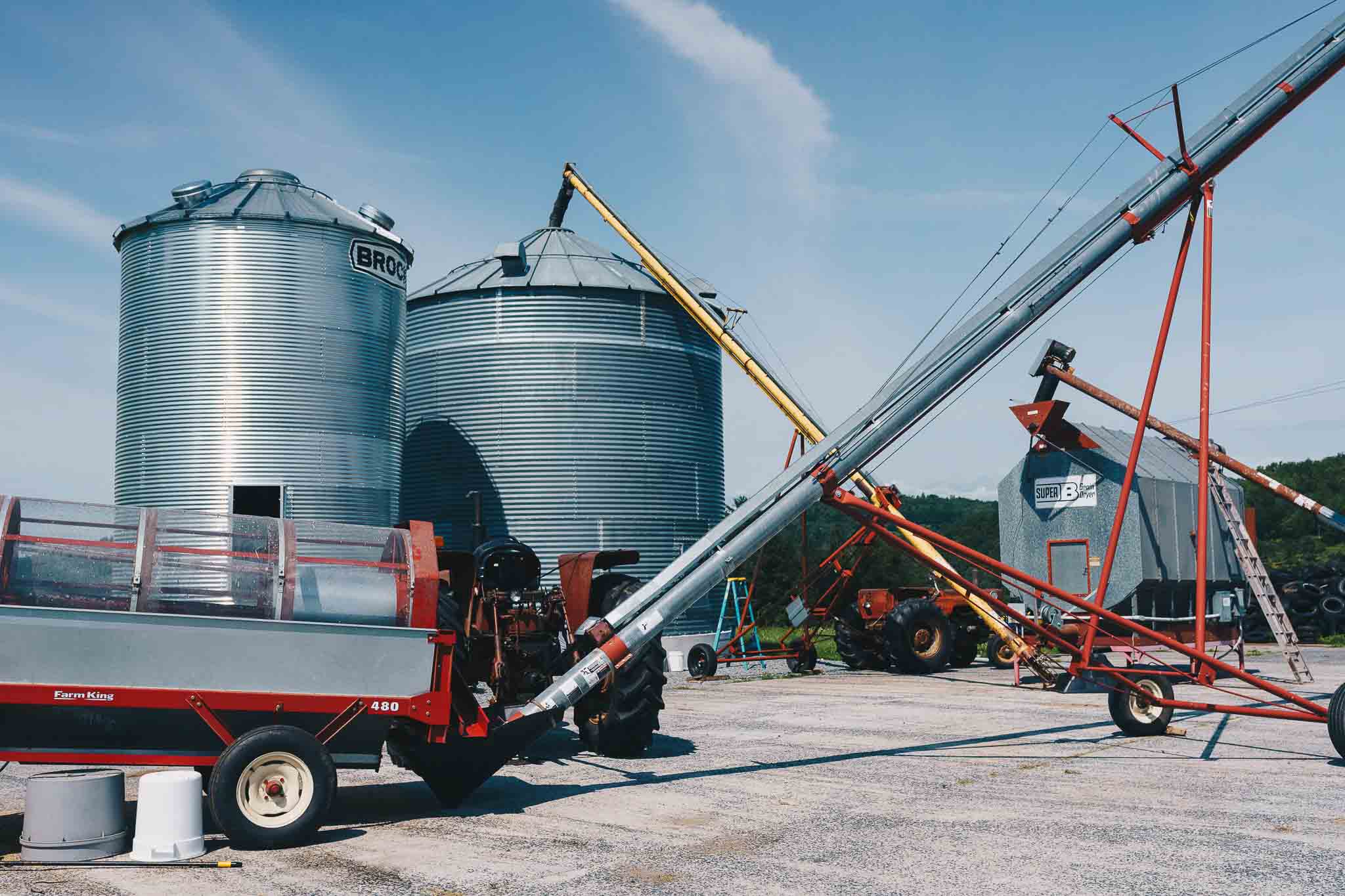 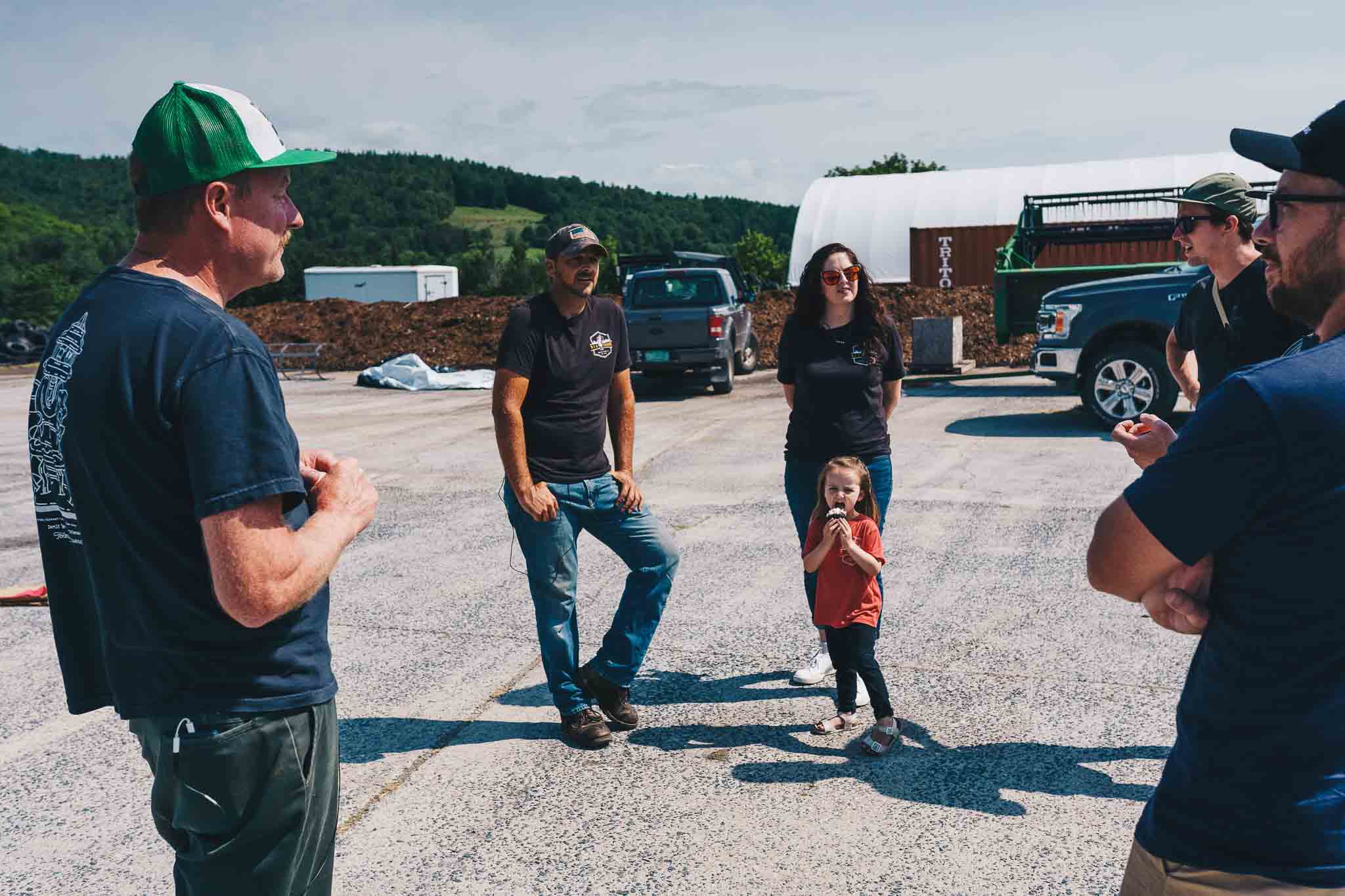 Shawn & Sara Gingue of NEK Grains giving us a tour of their farm and operation in 2020.
Photographer: Evan Loignon 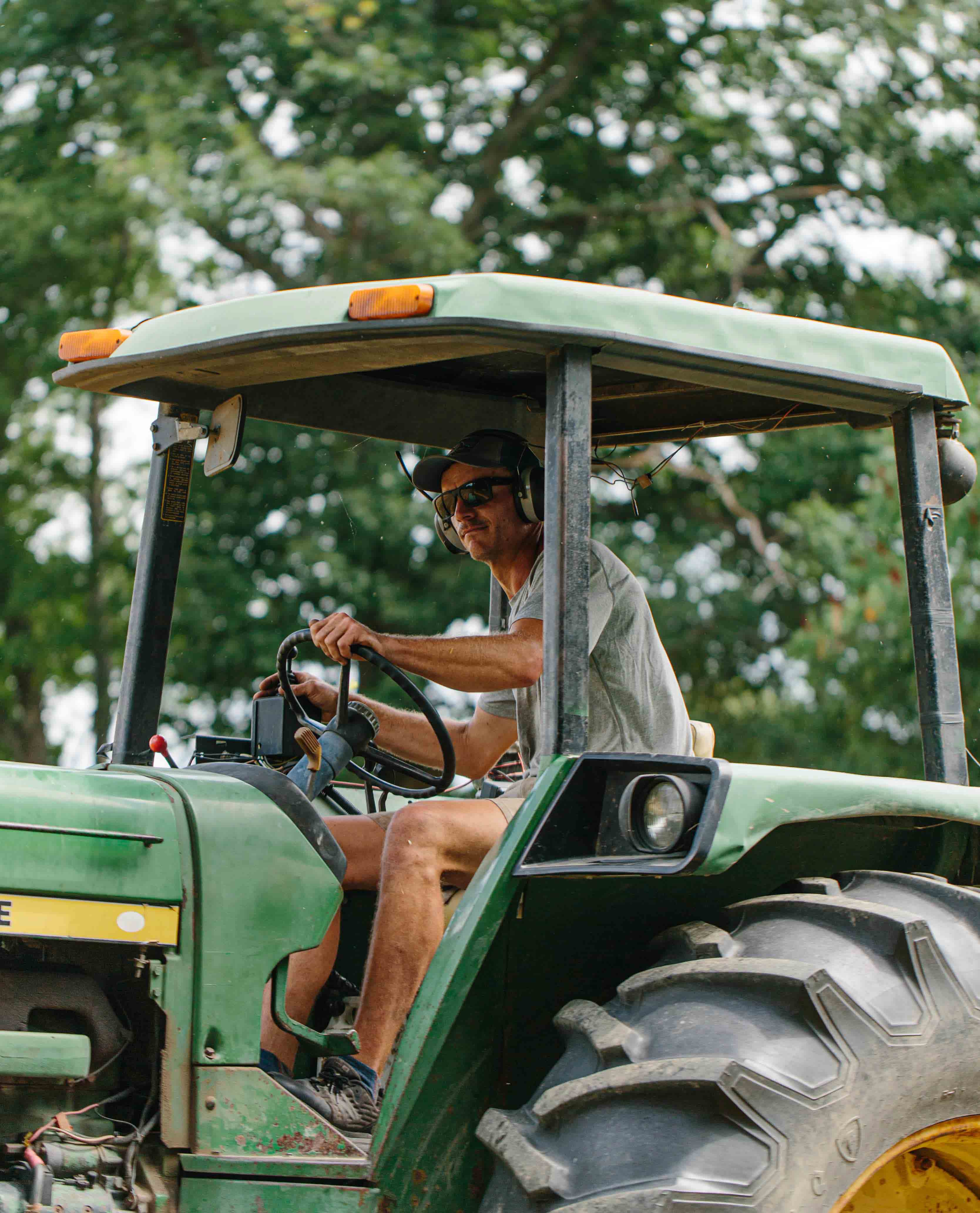 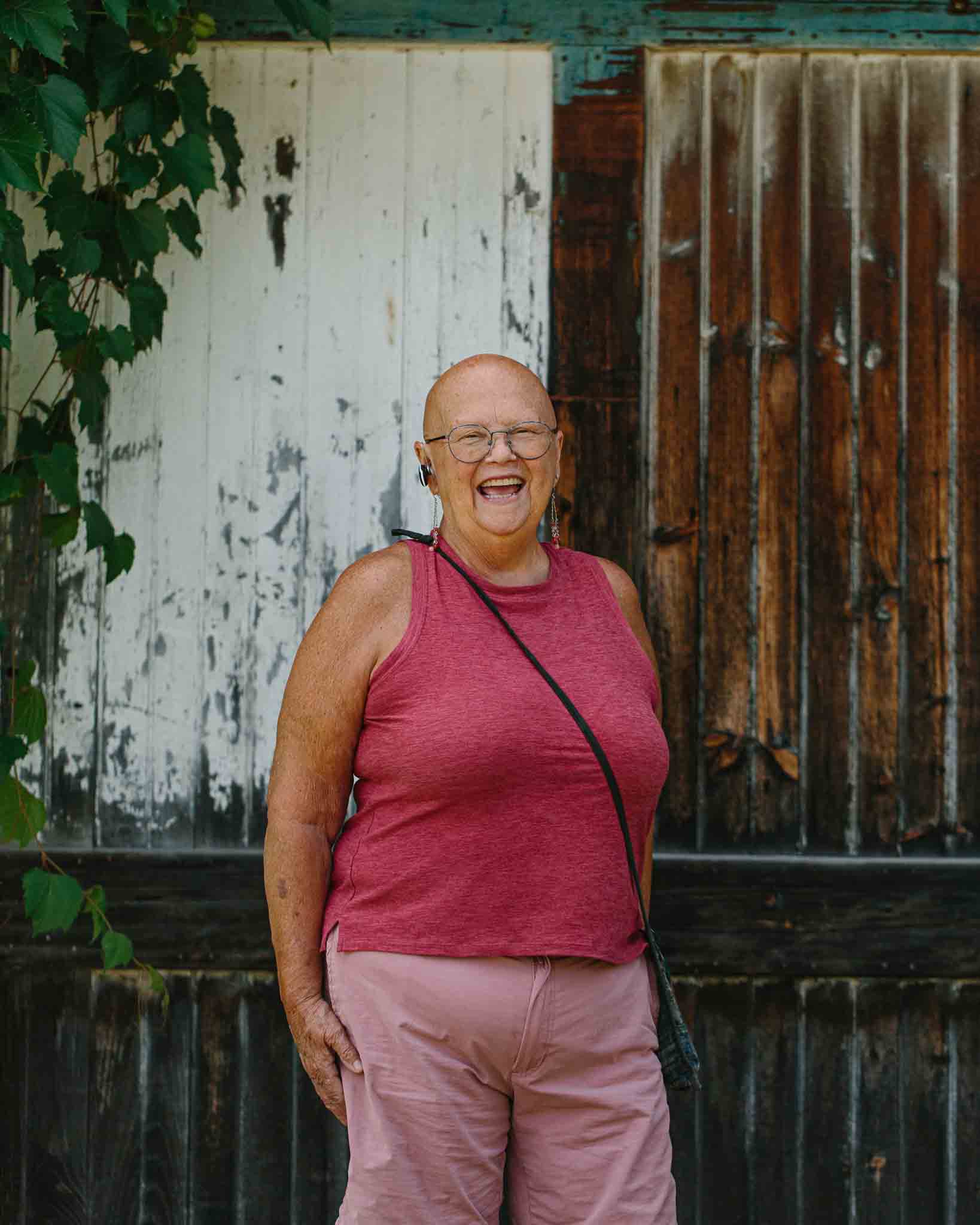 Owned and operated by a 7th generation farming family, Nitty Gritty Grain yields organically grown, local grains, providing For You with their flaked heirloom Wapsie maize. Believing in heritage, land, ingenuity, and quality products, the values and beliefs we share with Nitty Gritty Grain has resulted in a partnership that dates back to 2019, when we first started purchasing their raw wheat and Wapsie heirloom corn. Nitty Gritty Grain is among Foam’s top collaborators as their support for community and tradition align with the creation of good beer.

As New England’s largest hop farm and a longstanding partner to Foam since 2018, Champlain Valley Hops epitomizes the cohesive relationship between local agriculture and business. They not only have extensive knowledge of growing hops in the region, hard earned through years of experience with the UVM Extension Program, but they also have invested in processing equipment that is out of reach for most small hop yards. Taking it a step further, they hope to share this equipment with other hop farmers that have the ability to grow quality hops, but lack the infrastructure to process them for stable storage.

After years of brewing unique craft beers using CVH hops, we are excited to introduce our first consistently canned offering using their products. For You features our one-of-a-kind hop blend that we developed, in collaboration with their team, to meet our desired hop sensory experience. It boasts melon and citrus forward flavors of clementine, honeydew, and pomelo, alongside aromas reminiscent of resinous pine. 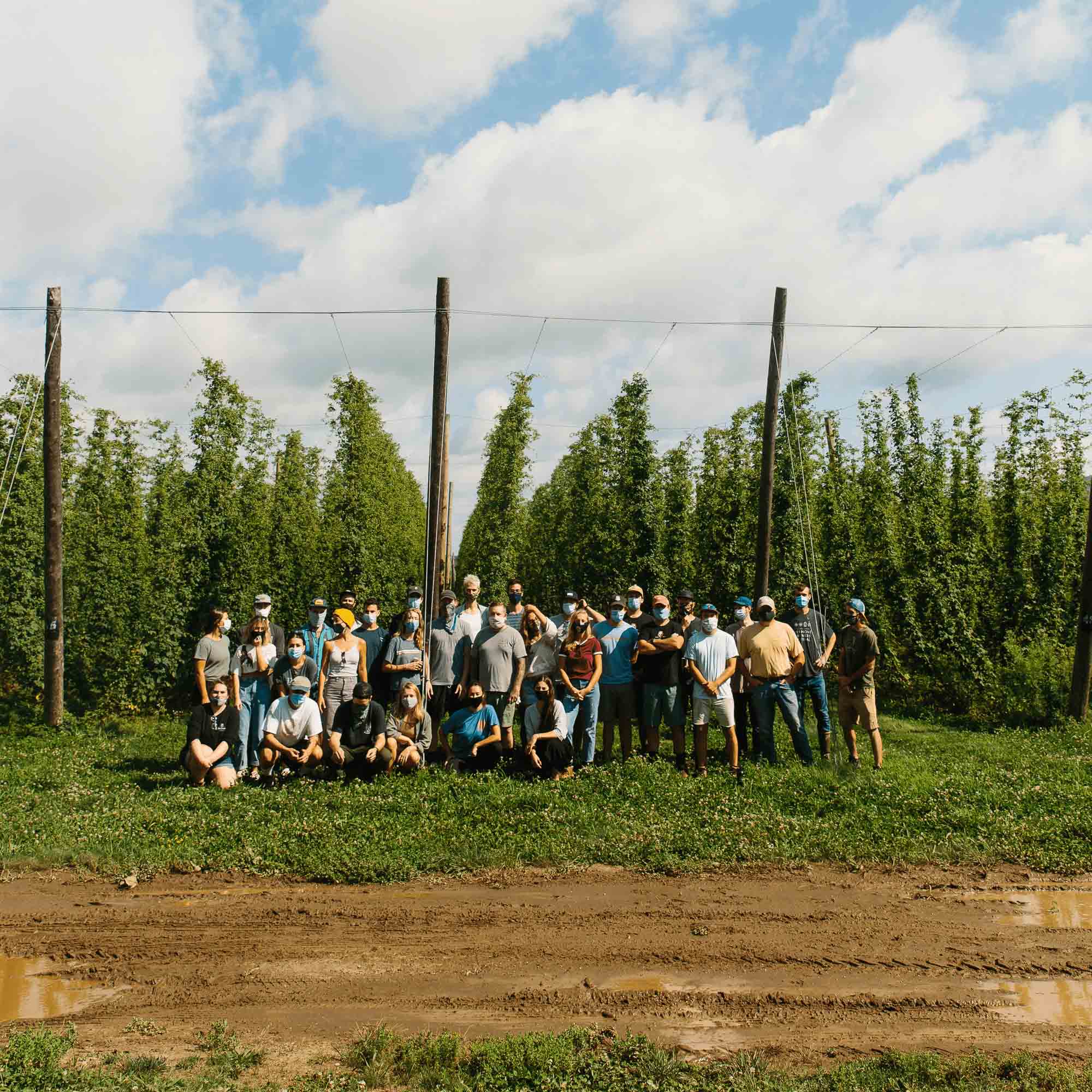 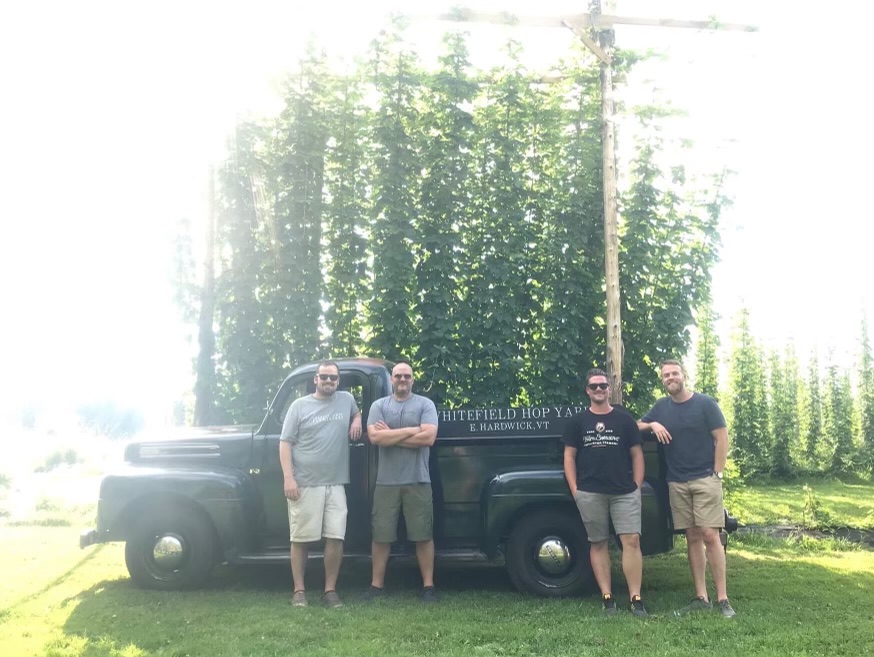 2019 visit & tour of Whitefield Hop Yard with our friends at Triple Crossing Brewery. Shot in front of Leopold, the wild hop varietal found and domesticated by Kevin and Karen.
Photographer: Josh Bayer

A true friend in the industry, Whitefield Hops is a small but thoughtful grower located in the Northeast Kingdom of Vermont. Kevin and Karen approach farming from a sense of place, with an ongoing conversation between the land, the plants, and us – the brewers. The result is a flower we feel honored to brew with. In this instance, For You features Whitefield grown Columbus, expressing some of the classic notes you would expect from the varietal while adding a distinct Vermont terrior that reminds us of fresh honeydew melon.

The end product that we are honored to share with our beer drinkers reflects the combined efforts of each individual farm, representing the pride and success of not only the agriculture in Vermont but the community bond within our culture.

Of course, if you know Foam, you know we also honor and celebrate creativity and individuality through art. Integrating art forms through various avenues in our everyday lives invigorates inspiration and creates a sense of connection to the local community. As part of our vision to embody authenticity while upholding Vermont’s creative economy, each one of Foam’s beers feature a local artist and their work. With For You, we’ve teamed up with longtime friend and local artist Viscaya Wagner for her first ever Foam can.

Born and raised in Vermont, Viscaya comes from a family of artists, designers, and creatives. Manifesting the bequeathed, generational passion, she pursued a BFA in Studio Art with a focus on Graphic Design at the University of Vermont. Following her studies, she spent time in Jackson Hole, Wyoming and Brooklyn, New York building on her talent by working as a curator and designer for various galleries including WeWork. Feeling the pull back to Vermont, Viscaya now lives in Burlington where she continues to create objects, artwork and spaces that prompt people to consider our own inhabitation of the world. Viscaya’s work ranges from bespoke furniture, functional objects, and spatial design, to custom artwork, illustration, and graphic design. Through her work, she hopes to bring depth, form, and humanity to our surroundings and incorporate art forms into our day-to-day spaces and rituals. As an artist, she hopes that behind each of her pieces, a genuine sentiment for joy, comfort, inspiration and motivation to participate in the world in a meaningful way transpires naturally.

The opportunity to showcase Viscaya's work on this can was an amazing honor, as her approach to art resonates powerfully with Foam's values. Approaching each unique can in this production as a symbol of the fluctuation in seasons, Viscaya utilized varying color waves while mindfully maintaining a level of cohesiveness. To assimilate the feel of the different seasons in Vermont, she focused on individual shapes, forms and characters that are emblematic of constant change. Just as every shift in season consists of differing behaviors, cycles, and experiences, For You will evolve and change with the ingredients and land that produces them. The hope remains that through each can, a distinct connection is made between our highly esteemed and local collaborators. 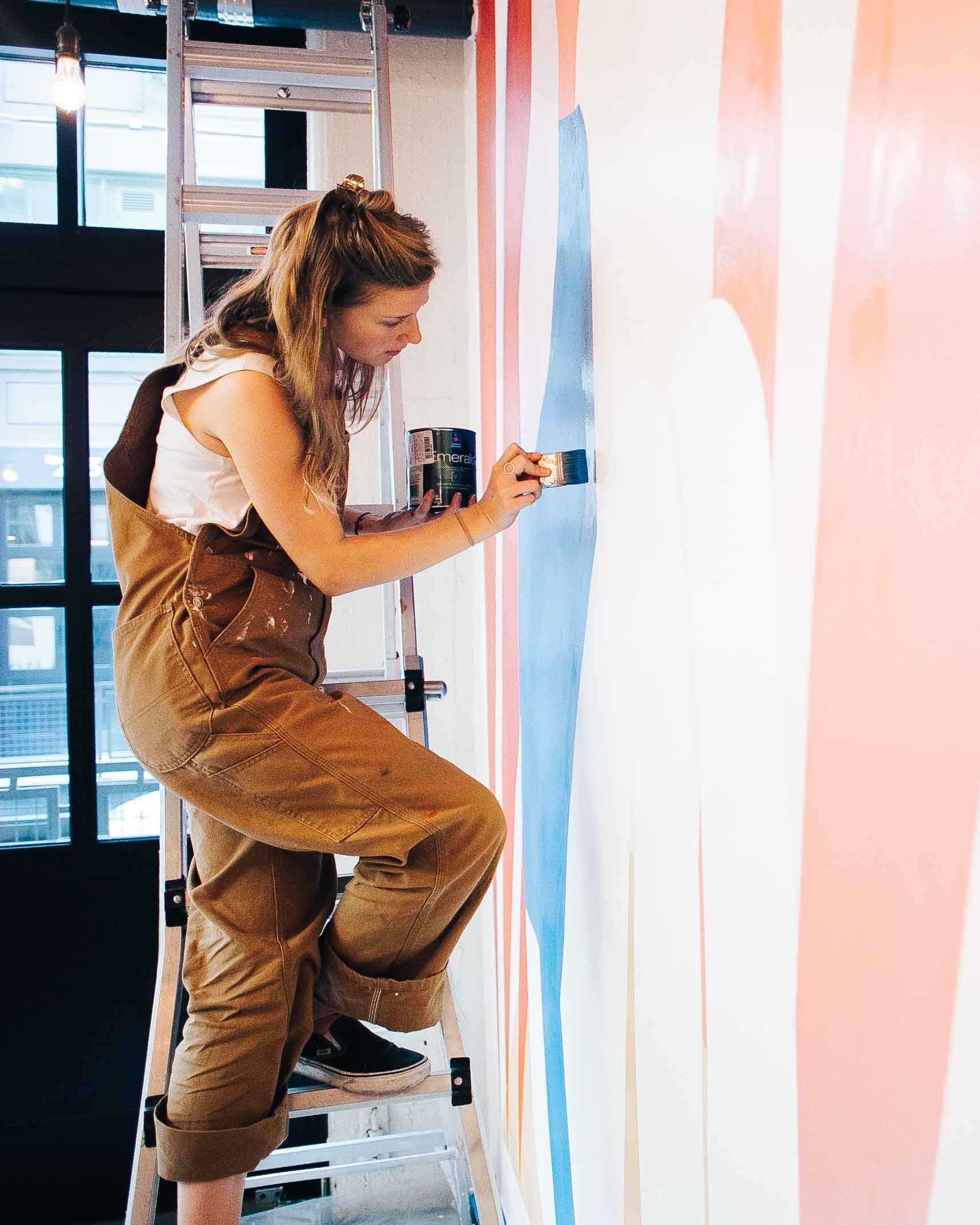 A New Beer for an Old Philosophy

As part of our ongoing commitment to our community, Foam Brewers stands firmly behind honoring our local growers, artists, and creators. Our passion for creating good beer through the use of sustainable, locally grown ingredients speaks not only to our approach to beer making, but to our brand ethos as well. What makes Vermont such a vibrant and special place is the integration between business and community, bringing people together to support the ongoing progression of our culture.

We like to think of For You as one of our greatest accomplishments yet. While we think you’ll love the beer itself, what we’re most proud about is what it represents: a culmination of past and future promises towards great, local beer. While it wouldn’t have been possible when we opened in 2016, the beer-centric agriculture scene has continued to grow here in Vermont, and we like to think maybe we played a small part in making that happen.

If the story behind this beer resonates with you, consider buying a 4-pack to go, or a market tote bag featuring the artwork of Viscaya Wagner.

Due to variables outside of our control, we will occasionally adjust the recipe for For You in order to ensure that we’re producing the highest quality beverage possible, utilizing 100% local ingredients. The beauty of the partnerships that we’ve developed is that if one supplier finds themself in the midst of a supply lapse, we have other area partners we can turn to bridge the gap. If you’re ever curious about where the ingredients in your can of For You are coming from, simply scan the QR code to find out! 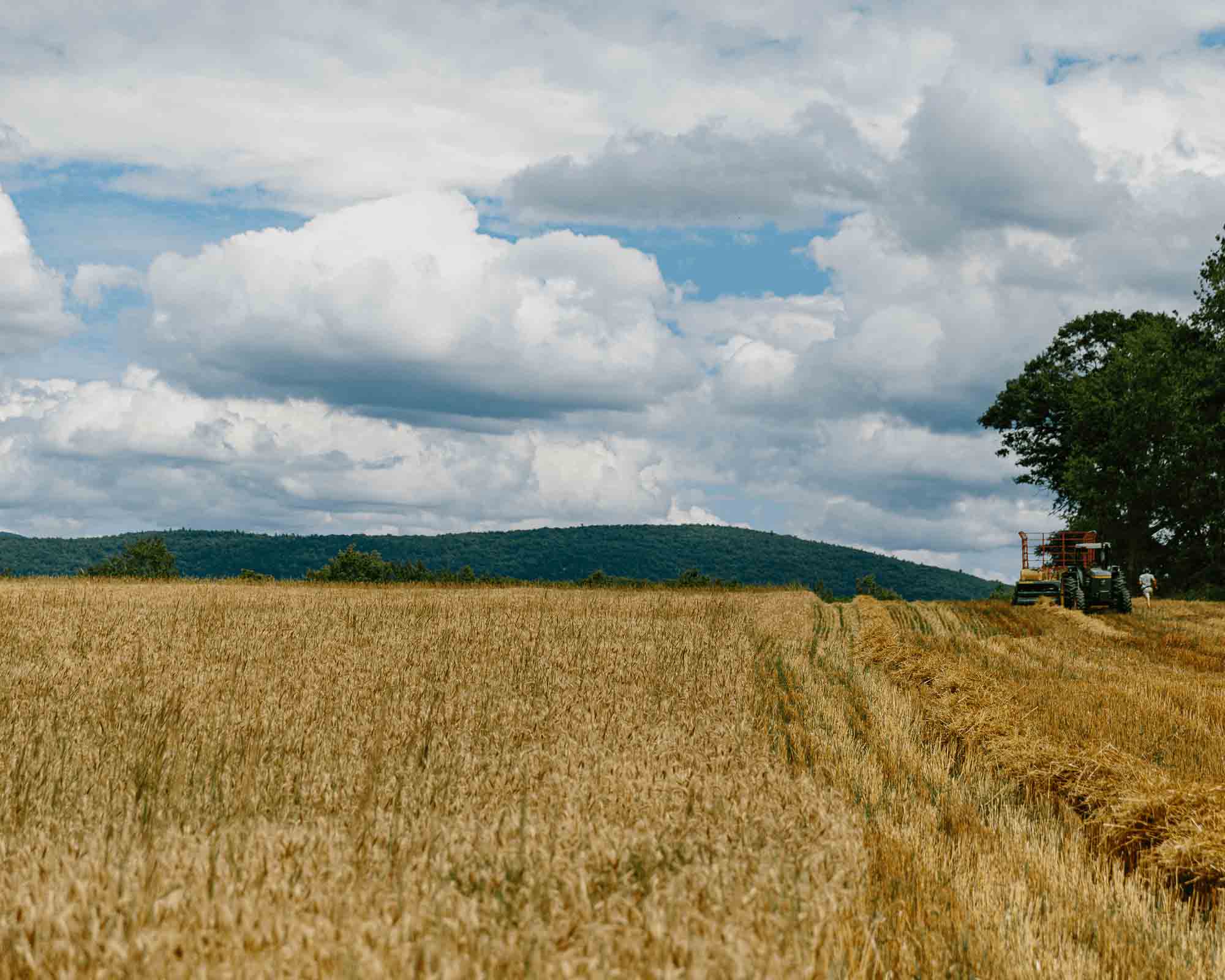